You are on the KUOW archive site. Click here to go to our current site.
News
Animals

How far will we go to save a single, sick orca?

There has been an extraordinary federal-local-tribal effort aimed at nursing the killer whale known as J50 back to health. But is it far enough?

Seattle Times reporter Linda Mapes has been covering the operation, and she told KUOW’s Angela King about it.

This is an attempt to save a female orca, an individual that can play an important role in breeding in the dwindling group known as the southern resident orcas. Scientists have tried feeding live salmon to her and injecting her with antibiotics, so what’s ahead now?

Well the plan at this point is to wait until the whales come back into Washington waters — they were on the outer coast Sunday night — and try to get close enough to get some dewormer into J50.

She's got internal parasites, which in a compromised animal can be quite dangerous. And if that goes well actually try to feed her medicated fish. They think she might have fungal pneumonia or some kind of infection.

There are certain kinds of medications, the only way you can give them is by mouth. So the idea is to dose some fish then get her to eat them.

Some people may say why not simply capture J50 and treat her, then release her? Wouldn't that be easier than trying to find her over and over again to drop medicated salmon into the water that she might not even eat?

Well that might be easier for us. But it would be a lot more invasive and possibly even detrimental to her family.

People around here will probably remember Springer. This was a young orphaned whale that was turning up at the Vashon ferry dock. Well NOAA fisheries did capture her, did put her in a sea pen, did medicate her and did successfully release her to her family in the wild. And she's since gone on to have two calves.

But the big difference here is J50 is traveling with her family. So one of the things scientists have to be very careful not to do is disturb her family or bother them. They want very much to keep her in the wild, with her family, and do what they can to feed her in her natural setting.

That's what's new about this. It's never happened that scientists have been able to medicate and feed a wild, free-swimming orca.

But there are those who may asking why we're doing this in the first place, can’t we just kind of stand back and let nature take its course?

Well I talked to some ethicists about that in my story that ran in Sunday's Seattle Times, and interestingly they all came down to the same place: We caused this problem. We have so altered, so degraded the whale’s habitat that we should try to alleviate what harm, what suffering we can.

The underlying crisis of their environment, that we caused, that's what we have to fix.

This interview was edited for length. 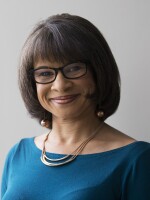 Angela King
Angela King is an Emmy-award winning journalist who’s been a part of the northwest news scene since the early 1990s. A proud University of Washington alumna, with degrees in Broadcast Journalism and American Ethnic Studies, she started her career as a news writer in Seattle, before becoming a reporter and anchor in Seattle, Portland and Albuquerque.
See stories by Angela King