Natasha Marin is a Seattle artist who noticed a divide on her Facebook feed: Her black friends were angry and frustrated about police shootings of black men, and her white friends were saying they wanted to help but didn’t know what to do.

“There is a discrepancy in the lives of people of color and white-identified people in the United States,” Marin said.

Marin put together the Reparations site and accompanying Facebook event. It was a place where people of color could post needs, and white people could help meet those needs.

Top read: Red Apple, at heart of black Seattle, will close to make way for Vulcan

“I feel like a lot of my white-identified friends and allies would like something specific to do so that they can feel less mired in guilt and stagnation, watching videos of brutality against people of color, angry articles, posts,” Marin said.

Offers and requests started pouring in almost immediately. Many of the requests were serious, tangible needs: money for groceries, a place to live, tuition assistance, car repairs. People responded with donations or posted something else they could provide: resumé editing, dog-sitting, rides around town.

“Leveraging your privilege doesn't necessarily have to cost you financially,” Marin said. “Will you listen to me yell and scream for an hour and just vent my anger in a way that’s safe? Can you teach me how to sculpt or bead? Can you mentor me? If you're an executive at a company and somebody’s looking for a job, you’re a referral – your name drop could make a difference in that person's life.”

[asset-pullquotes[{"quote": "Being generous is a great way to fix that feeling in your spirit.", "style": "left"}]]Reagan Jackson, an artist, teacher and columnist for the Seattle Globalist, told KUOW’s Bill Radke about deciding to put in a request.

At first, she found the project disquieting.

But she found herself glued to the Facebook page where people made requests.

Like the mom who needed a reliable vehicle for her family; the single mom of three who needed help with a rental deposit; the track-and-field college athlete looking for a cosigner for a loan.

“I had this experience – people are taking this seriously,” Jackson said. “I found it to be very touching, to a point where I thought maybe there’s something to this. So I decided to try.”

She asked herself what she would be willing to accept – and what would help with her healing.

“Over the course of my lifetime, there has been a continuous revelation that it’s totally OK to kill me,” she said.

After some thought, Jackson settled on a $100 gift certificate to Michaels Craft Stores. It was a small gift, but not insignificant, and it would allow her to pursue art, which she doesn’t have much time for these days.

“I could go home, have a nice cup of tea and paint and zone out,” Jackson said. “Maybe just for an hour. That would be something.”

Two people responded. One was an artist in Colorado who sent a care package of paints and glitter.

“I’m white – I’m Jewish as well – and I’ve lived in what would traditionally be called the black community for 20 years,” Lynnxe Murphy said. “And married to a person of color for 25 years.”

[asset-images[{"caption": "Reagan Jackson, an artist and teacher, didn't think she would participate in a 'Reparations' experiment that started in Seattle.", "fid": "128763", "style": "placed_wide", "uri": "public://201608/reagan.jpg", "attribution": "Credit Michael Maine"}]]She’s been through “terrifying police stops” with her husband, she said, and worried about him coming home safely at night.

“This stuff has always shaped my life. I almost feel like it’s my job as much as possible to get white people to understand the issue,” she said.

“We all have this new language to learn – it’s not new to people of color – but white people have the privilege of thinking they don’t have race,” she said.

“People run around being butt-hurt when someone called them racist, when they were,” she said. “The sad fact is that until we share the same language about what racism is, there will be a lot of misunderstandings. People are so afraid they are going to be painted with this brush.”

Lynnxe Murphy asked Jackson what she wanted and gathered 20 pounds of materials from her studio. It included paints and fancy automotive glitter from a previous project. Shipping cost about $17.

For her, the Reparations experiment was not about wealthier white people giving to poorer black people.

“It’s about opening your heart to somebody and making a connection,” Lynnxe Murphy said. “‘I’m sorry about what you’re going through.’ It’s the least I could do.”

Another woman reached out to Jackson saying they met 16 years ago. The woman said that Jackson had said something, and that she, the woman, had responded defensively.

Jackson didn’t remember the woman or the interaction. She told the woman she wasn't harboring resentment and that she wished her well. Then Jackson checked her email; the woman had given her the gift certificate to Michaels.

These were two of many positive exchanges that have taken place on the site. But like many online activities, particularly concerning race, trolls emerged.

Natasha Marin and her network created a way to deal with them: the Troll Slaying Brigade. For every negative comment received, the Brigade donates a dollar to person of color who has made a request.

“Now the trolls are on our side, and the trolls have actually raised more money than had been raised prior,” Marin said.

The project name, Reparations, may evoke some divisive reactions, but Marin said the word does not have to be about a specific historical event.

“It's really about making something that's broken, fixed. And being generous is a great way to fix that feeling in your spirit.

“For the most part I think that we all want the same things: We want to be seen, we want to be remembered well and we want to add value to humanity. We want to make an impact in some positive way, and this is a really doable way to do that.

“Just sit and think right now to yourself, ‘What is it that I could offer a stranger? How could I add value to somebody’s life?’”

Produced for the Web by Kara McDermott. 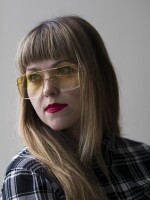