You are on the KUOW archive site. Click here to go to our current site.
More from KUOW
Arts & Life

In Jennifer Maier's poem, "Responsible Person," a young boy practices constructing a self by building a paper version of the man he hopes to be in the future.

His father and the poem's speaker, "not his mother, the woman after his mother" look on, noting that he looks "like someone // you could count on, one of the numbered / good on which the world depends."

The poem is part of her new collection, "Now, Now" published by University of Pittsburgh Press this month.

Maier is an associate editor of Image magazine and a professor of English at Seattle Pacific University. Her previous collection, "Dark Alphabet" was named one of the Ten Remarkable Books of 2006 by the Academy of American Poets.

She was recorded in the KUOW Studios on October 11. 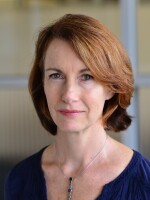