Scientists sunk a rare blue whale skeleton. Now they need money to bring it back up | KUOW News and Information
Listen Live

Scientists sunk a rare blue whale skeleton. Now they need money to bring it back up

There’s a set of massive whale bones resting on the bottom of the bay in Newport, Oregon. Scientists from Oregon State University put them there with a plan for a future display on shore. But they’re having trouble finding the money to retrieve the rare blue whale skeleton from beneath the waves.

"It’s a whale of a problem, but it's a great idea," said OSU Marine Mammal Institute Director Bruce Mate.

He and a team of volunteers salvaged the bones from a nearly 80-foot-long blue whale that washed ashore dead near Gold Beach. The team bundled the bones in fishing nets and dropped them on the bottom of Yaquina Bay for crabs and other scavengers to pick clean. That was just over two years ago.

"Basically, we're ready to bring it up and start putting it together," said Mate.

But before the team can do that, Mate said they need to secure the funds to prepare and reassemble the skelton. One of the complicated remaining steps is to chemically extract the stinky, residual oil in the whale bones.

Blue whales swim offshore of the Pacific Northwest every summer, but are rarely seen from land. Mate said the carcass that washed ashore in Oregon in late 2015 was an extremely rare event.

"As near as I can tell, this is the first blue whale on the Oregon Coast since the Lewis and Clark Expedition reached the coast and found Native Americans taking flesh off of a blue whale," Mate said.

Mate first put out a call for $125,000 in donations in late January. He got some offers of volunteer help, but not the needed money. So the call goes out again now with a little more urgency. 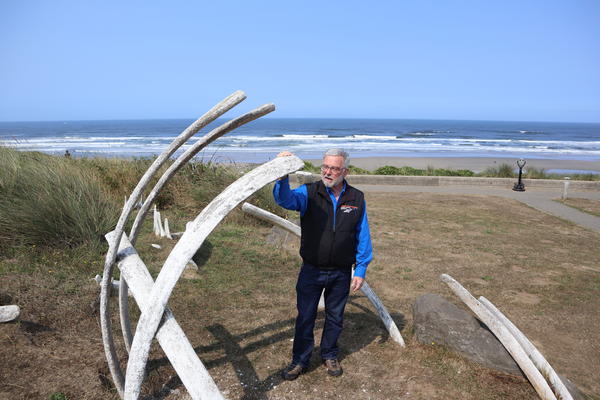 Oregon State University has reserved a spot for the whale skeleton in front of its new Marine Studies Building at the Hatfield Marine Science Center in Newport. That building is currently under construction. The opening date is about one-and-a-half years away.

Mate said he does not want to retrieve the bones from the bottom of the bay until he knows his team has the funds to carry the project all the way through.

"We feel pretty confident we can get the job done in six to nine months," Mate said. "We want to get it done before the opening of the building."

A major cost driver for the project is the expense of retaining a crane and barge for the retrieval of the bone bundles from an undisclosed location in the bay. Then there are the costs of the hazardous chemicals and facility needed to leach the oil from the skeleton before it is assembled.

In an interview Thursday, Mate raised the possibility of raising money by selling naming rights to the monumental display.

"You could park a Volkswagen in the shade under the fluke of a blue whale," he marveled. "I mean, it's very, very impressive."

The OSU Foundation set up a "Blue Whale Articulation Fund" for donations. No state or federal funding could be located for this endeavor, according to Mate.

Six more women have come forward with allegations of sexual misconduct and assault against David Meinert, the Seattle nightlife entrepreneur.

These women contacted KUOW after reading an earlier story about Meinert, in which five other women had accused him of sexual misconduct, including sexual assault and rape.

Is a plane from Sea-Tac going to crash onto your house?

Seattleites worry a lot about disasters. Earthquakes, landslides, forest fires (or at least the smoke from them) ...

Then there's the concern that a plane might land on your head.