Austin is among a handful of U.S. cities that could see a rush of newcomers in the next century as rising sea levels force people out of coastal areas, according to a new study published in Nature Climate Change.

“We’re talking about the conversion of essentially habitable land into uninhabitable water. It really begs the question: Where are these people likely to go?” says Matt Hauer, a demographer at the University of Georgia who authored the study. “This paper tries to answer that question.”

Hauer looked at historical migration trends and projected out, assuming that people affected by sea level rise would probably move to destinations where people are already moving.

“Austin is semi-close to the coast…It has a very thriving economy, as well,” he says. “So, for Austin to be a destination it makes a huge amount of sense.”

Lloyd Potter, the state demographer of Texas, says that assumption is a reasonable one.

He says a city’s history of attracting newcomers is usually a good indicator of how many will come in the future. But climate change introduces uncertainties: What if a destination city, like Austin, gets too dry to support the growth? What if people affected by sea level rise stay closer to the coast?

“I mean, it could be they just move 10 miles farther inland and now they’re still on the coast,” he says. 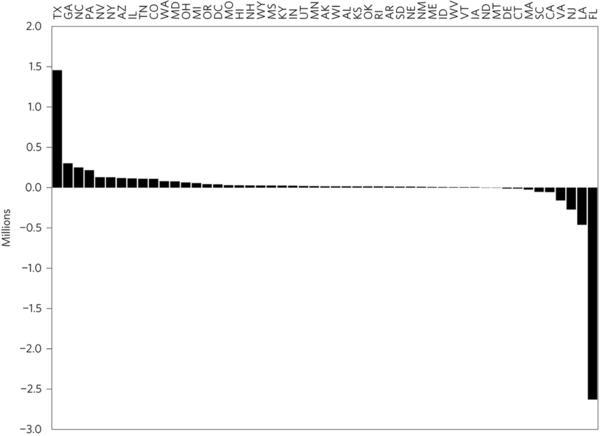 Steve Murdock is a sociologist at Rice University and former director of the U.S. Census Bureau. He says Austin’s relatively high cost of living might complicate the projections.

“The reality is it’s the poor who end up getting victimized by natural disasters and they have to move,” he says. “They’re not going to be able to move to places where the cost of housing is even higher than where they’re living now.”

The question of who might be displaced is exactly what Hauer wants to study next.

In the meantime, he says, coastal communities and destination cities should consider investing in housing and infrastructure to prepare for sea level rise and population shifts.