He Got A Bad Grade. So, He Got The Constitution Amended. Now He's Getting The Credit He Deserves. | KUOW News and Information
Listen Live

He Got A Bad Grade. So, He Got The Constitution Amended. Now He's Getting The Credit He Deserves.

This story was originally performed as part of Pop Up Magazine.

With everything that’s going on in politics these days, it helps to remember the power that we have as individuals to make change. Examples of this are far too few, of course.

But there is one that stands out. And you’ve probably never heard it.

The story begins in 1982. A 19-year-old sophomore named Gregory Watson was taking a government class at UT Austin. For the class, he had to write a paper about a governmental process. So he went to the library and started poring over books about the U.S. Constitution — one of his favorite topics.

“I'll never forget this as long as I live,” Gregory says. “I pull out a book that has within it a chapter of amendments that Congress has sent to the state legislatures, but which not enough state legislatures approved in order to become part of the Constitution. And this one just jumped right out at me.”

That unratified amendment read as follows:

Basically, it means any raise Congress votes to give itself can’t take effect until after the next election, allowing voters to decide how they felt about that.

The amendment had been proposed almost 200 years earlier, in 1789. It was written by James Madison and was intended to be one of the very first amendments, right along with the Bill of Rights.

But it didn’t get passed by enough states at the time. You see, to ratify an amendment, you need three-quarters of states to approve it.

This amendment, though it was 200 years old, didn’t have a deadline.

Gregory was intrigued. He decided to write his paper about the amendment and argue that it was still alive and could be ratified. He got to work, being very meticulous about citations and fonts and everything. He turned it in to the teaching assistant for his class -- and got it back with a C.

He didn’t know what to make of it. He was sure it was better than a C.

He appealed the grade to the professor, Sharon Waite.

“I kind of glanced at it, but I didn't see anything that was particularly outstanding about it and I thought the C was probably fine,” she recalls.

Most people would have just taken the grade and left it at that. Gregory is not most people.

“So I thought right then and there, ‘I'm going to get that thing ratified.’”

Gregory needed 38 states to approve the amendment -- three-quarters. Nine states had already approved it, most back in the 1790s, so that meant he needed 29 more states for it to pass. He wrote letters to members of Congress to see if they knew anyone in their home states who might be willing to push the amendment in their state legislature. When he did get a response, it was generally negative. Some said the amendment was too old; some said they just didn’t know anyone who’d be willing to help. Mostly, he got no response at all.

“So I'm thinking my first success story; this can actually be done,” Gregory says.

Feeling emboldened, Gregory started writing to every state lawmaker he thought might be willing to help. He wrote dozens of letters. After a while, it started to work. Colorado passed the amendment in 1984. And then it picked up momentum. Five states in 1985. Three each in 1986, 1987 and 1988. Seven states in 1989 alone (including Texas).

By 1992, 35 states had passed the amendment. Only three more to go. After 10 years of letter-writing, sweet-talking and shaming, Gregory was within reach of his goal.

On May 5, 1992, both Alabama and Missouri passed it. And on May 7, as Gregory listened on the phone, the Michigan House of Representatives put the amendment over the top.

His quest was finally over: More than 200 years after it was written, the 27th Amendment was finally ratified.

“I did treat myself to a nice dinner at an expensive restaurant,” Gregory recalls.

(Though it did come to light later that, unbeknowst to anyone, Kentucky has ratified the amendment in 1792, which made Alabama the 38th state to ratify it.) 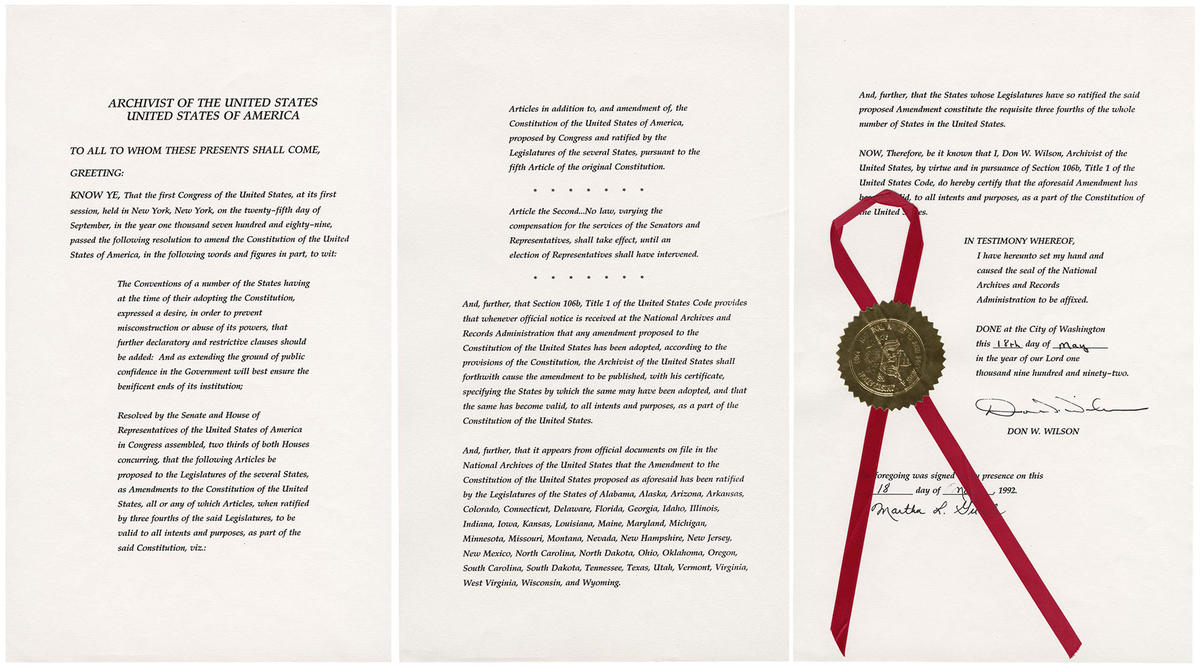 What’s so striking about this story is the sheer degree of difficulty of what Gregory did. Amending the Constitution is — by design — incredibly hard to do.

"The founders saw this as higher law,” says Zach Elkins, a government professor at UT-Austin who introduced me to this story.

"So in some sense [the Constitution] should be beyond the reach of majorities and certainly a majority in the legislature, which makes sense for higher law. You want something a little more stable.”

But here’s a guy, really a kid when he began, who actually did it. The 27th Amendment is still the most recent amendment to the Constitution.

And it’s comforting to know that one person really can make a difference.

“I wanted to demonstrate that one extremely dedicated, extremely vocal, energetic person could push this through,” Gregory says. “I think I demonstrated that.”

Gregory has kept pursuing these kinds of quests since then. In 1995, he realized Mississippi had never ratified the 13th Amendment, which abolished slavery. So he pushed that state’s Legislature to do it — and it worked. It was symbolic, but it meant something.

Gregory has been a state legislative aide and a city council aide in Austin for years.

Lately, his project has been getting the city to put up street signs at intersections that don’t have them.

“They don't want to put a sign at Andrew Zilker and Columbus drive, but I'll keep pestering them. And finally they will!”

They did, by the way.

Back in 1992, as Gregory celebrated his achievement with the 27th Amendment, things weren’t going as well for his former professor, Sharon Waite. She had moved back to South Texas in the 10 years since Gregory was her student. She tried to get a teaching job down there, with no luck.

“I was feeling sorry I'd spent all those years studying and you know...nothing!” Sharon says.

She’d look at all the papers and books and stuff she’d collected over the years getting her master’s degree and her PhD, and she wondered, “What was it all for?”

Until one day, she gets a phone call from someone writing a book about constitutional amendments.

“They said, ‘Well did you teach at UT Austin in the early ‘80s?’ and I said, ‘Yes I did,’” Sharon says. “And then they asked, ‘Did you know that one of your students, Gregory Watson, pursued getting this constitutional amendment passed because you gave him a bad grade?’”

Sharon was blown away. And in that moment, she felt redeemed.

“Many people have said you never know what kind of effect you're going to have on other people and on the world. And now I'm in my 70s, I’ve come to believe that's very, very true. And this is when it really hit me because I thought to myself, ‘You have, just by making this fellow a grade he didn't like, affected the U.S. Constitution more than any of your fellow professors ever thought about it and how ironic is that?’”

And with the benefit of hindsight, Sharon says, Gregory clearly doesn’t deserve that C she gave him.

“Goodness, he certainly proved he knew how to work the Constitution and what it meant and how to be politically active,” she says. “So, yes, I think he deserves an A after that effort -- A+!”

And that’s exactly what happened. 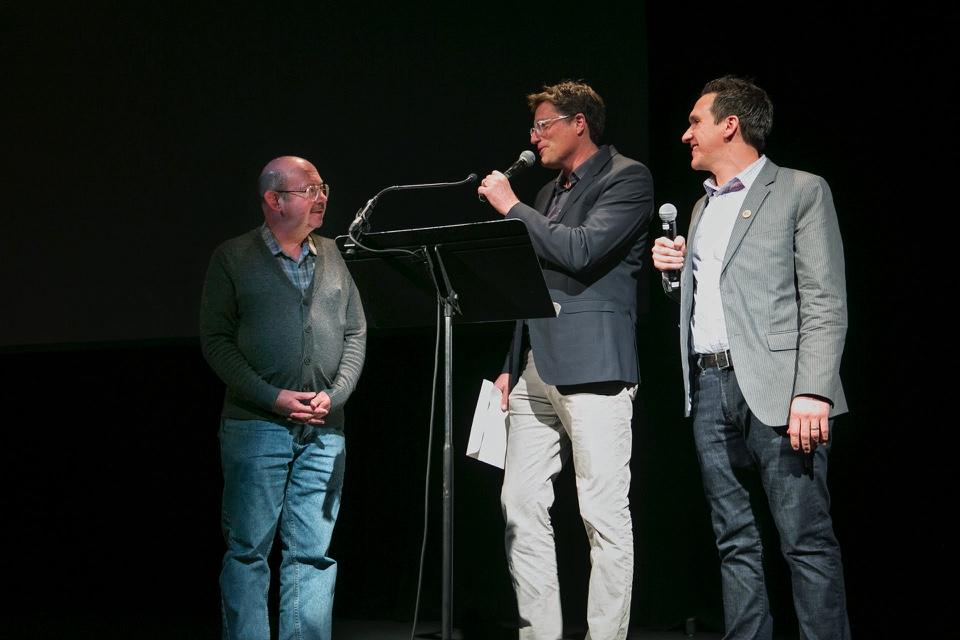 Zach Elkins, the UT professor we heard from earlier, engineered a grade change for Gregory.

On March 1, Sharon signed a form to officially change the grade. At the Pop-Up Magazine show at the Paramount Theatre in Austin on March 4, we brought Gregory up on stage to surprise him with the grade change. 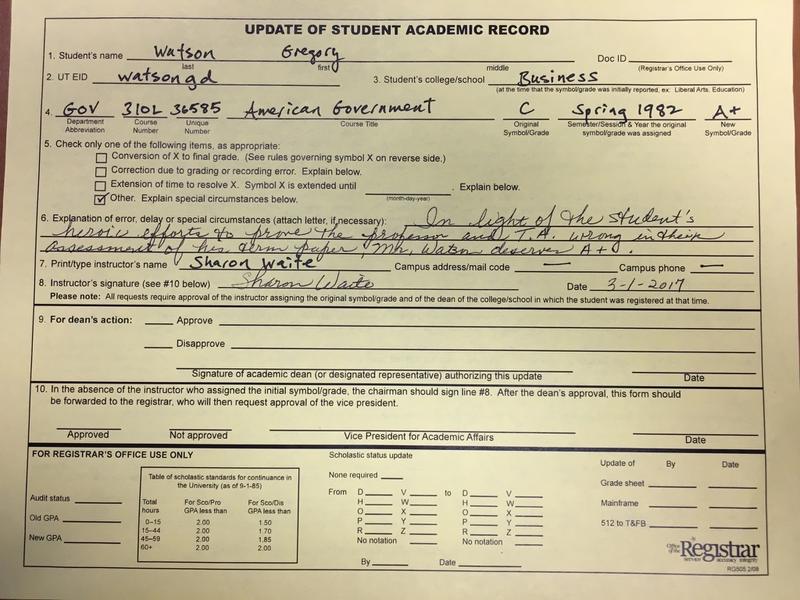 To justify it, Sharon writes: "In light of the student's heroic efforts to prove the professor and T.A. wrong in their assessment of his term paper, Mr. Watson deserves A+."

On April 20, the dean of the McCombs School of Business (Gregory was a business major back in 1982) signed off on the grade change. So, 35 years after Gregory wrote his paper, he finally changed that C to an A.

"Very long overdue, to put it very mildly," says Gregory. "This is something that should have happened decades ago. But better late than never, as the old saying goes."